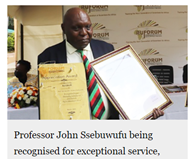 When Professor John Ssebuwufu ambled up to receive a certificate of recognition for his ‘exceptional’ contribution to higher education from the Regional Universities Forum for Capacity Building in Agriculture (RUFORUM) at Makerere University (MU), he was thinking of many things, such as rewarding staff, that he could have done differently to impact university education more.

But he did what he could have done, under the circumstances.

He emphasised the use of information communication technologies in almost all the institutions he had been involved in and sent many academic staff on exchanges to boost research and innovation. Now, more African universities engage in ground-breaking research.

So, he proceeded to accept his recognition and make his acceptance speech, which was mostly about gratitude.

Ssebuwufu, 74, who is currently the chancellor at Kyambogo University and the vice-chancellor of the University of Kisubi, is credited for his exemplary leadership and pragmatic methods that have shaped higher education in Uganda and Africa as a whole.

For instance, he boldly advocated the shift from a term to a semester system of instruction at MU when he had just taken up the vice-chancellorship in 1993.

He was also part of the team that championed the admission of private students (who have to pay for their own tuition as opposed to those funded by the government) at MU in the early 1990s, to enable more qualifying students to access higher education.

“Professor Ssebuwufu has contributed to promoting investments in higher education infrastructure, distance learning, and new postgraduate curricula,” said Professor George Kanyama-Phiri, RUFORUM’s board chairperson at the event in May.

“Through his various engagements, he has also contributed to development of regional ICTs, environmental protection, science, technology and innovations.”

Professor Eriabu Lugujjo, the vice-chancellor of Ndejje University, said Ssebuwufu has been pivotal in higher education research on the continent, notably when he was the director of research programmes at the Association of African Universities (AAU), based in Ghana.

The veteran academic was also one of the 10 vice-chancellors who, in 2004, orchestrated the establishment of RUFORUM, which links 129 African universities to engage in research.

Apart from the recognition by RUFORUM, Ssebuwufu has received honorary doctorates from Queen’s University, Belfast, his alma mater, and the University of Kisubi. During Uganda’s independence golden jubilee celebrations in 2014, Ssebuwufu received a national medal for his contribution to higher education.

The academic has also served as chancellor of Kampala International University, principal of Kisubi Brothers College and principal of the Institute of Teacher Education at Kyambogo. He remains the longest-serving vice-chancellor of MU, leading the institution from 1993 to 2004.

A chemist turned university administrator, Ssebuwufu attended Namilyango College in Uganda for his high school education in the early 1960s. Thereafter, he enrolled at Makerere University for his BSc in chemistry. He returned to the university for an MSc, also in chemistry.

In 1974, he enrolled as a doctoral student at Queen’s University in Belfast in Northern Ireland. He graduated in 1977. After graduation, Ssebuwufu spent another two years at Belfast completing a postdoctoral fellowship.

He returned to Uganda in 1979 and was appointed as a lecturer in the department of chemistry at MU. By 1987, he was the head of his department.

He attained professorship in 1990 and was appointed principal of the Institute of Teacher Education (ITEK), now part of Kyambogo University.

Ssebuwufu led ITEK until 1993, when he was appointed vice-chancellor at MU. That was when his prowess in higher education administration started to show.

Ssebuwufu had a dream for the institution of higher learning, which was the only university in Uganda at the time. He wanted the university to compete, and its graduates to become more relevant to society and respected regionally. He wanted a university that emphasised ICT, research and innovation.

“I had a vision, which was broad and narrow in the same way,” Ssebuwufu said in an interview with University World News. “We modernised the face of Makerere and promoted ICT, research and innovations.”

So, he started by overhauling dilapidated lecture rooms, administration blocks and student halls of residence.

“We worked on the toilets, did painting jobs and set up a number of new buildings,” he said.

After refurbishing the hardware, attention was focused on the software. And the vice-chancellor started encouraging his academic staff to enrol for further studies, mainly at doctoral level.

“Many of our teaching staff had masters degrees,” Ssebuwufu said. “But we needed to freshen things. We needed new knowledge. So, we started collaborations with some universities in Southern Africa, where we sent several of our academic staff to go and study towards their PhDs.

“We also had to invest in ICT if we wanted to compete with the best universities on the continent,” he said. “We connected our main building to the internet and started to digitise most of our files.”

Ssebuwufu caused a silent revolution that put MU back on track,” said Professor Adipala Ekwamu, the executive secretary at RUFORUM.

By the time Ssebuwufu left in 2004, more academic staff (close to 40) had PhDs and the university was among the institutions generating the most research on the continent. Academic programmes and student enrolment had also increased.

After his tenure at MU, Ssebuwufu was appointed the director for research programmes at the AAU in Ghana.

During his stay in Ghana, he lobbied for funding to facilitate more research on the continent. And, in February 2014, President Yoweri Museveni appointed Ssebuwufu chancellor at Kyambogo University.

“He understood [and still does] that African universities needed to focus on research and collaboration to become relevant,” Ekwamu said. “And he devotedly sent members of staff to other institutions, either on exchanges or doctoral programmes, to give them exposure in their quest to generate new knowledge.”

Ssebuwufu also arranged for MU staff to travel around Uganda to appreciate various parts of the country, Ekwamu said.

“The staff travelled to different districts across the country to determine the impact the university was having on local communities.”

He left Makerere a very competitive university, in terms of the research it generated, he said.

Gifted leader with a few regrets

“He is a leader that recognised and respected his juniors, peers and seniors alike,” he said. “He has a gift to remember the names of almost everyone he meets.”

Ssebuwufu did not just make an impact on higher education in Uganda, but across the continent. In 2013, he was appointed chairperson of the UbuntuNet Alliance, a regional research and education network that focuses on increasing research and innovations in Eastern and Southern Africa.

He is also a member of the World Bank Millennium Science Initiative and is one of the technical experts for Uganda. He serves as the chairperson of the board of directors for the National Council for Science and Technology, Uganda Management Institute, and the National Environment Management Authority of Uganda.

Ssebuwufu is also chairperson of the board of directors for Citibank Uganda — a subsidiary of Citigroup of New York City.

But there are some things that he wishes he could have done differently to impact higher education more. Things like staff welfare, which is still a challenge in many institutions of higher learning in Africa.

Ssebuwufu wishes he could have found a way to reward his teaching staff more. He wishes he had been able to further improve infrastructure at the institutions he led, to absorb more students.

“There is a famous hall at MIT [Massachusetts Institute of Technology], Baker House. I had really wanted to copy its design and build the exact complex at Makerere,” Ssebuwufu said.

But, sitting in his living room in Ggaba near Lake Victoria, the 74-year-old looks back at his industrious career with more satisfaction that regret. Others can now continue the legacy.