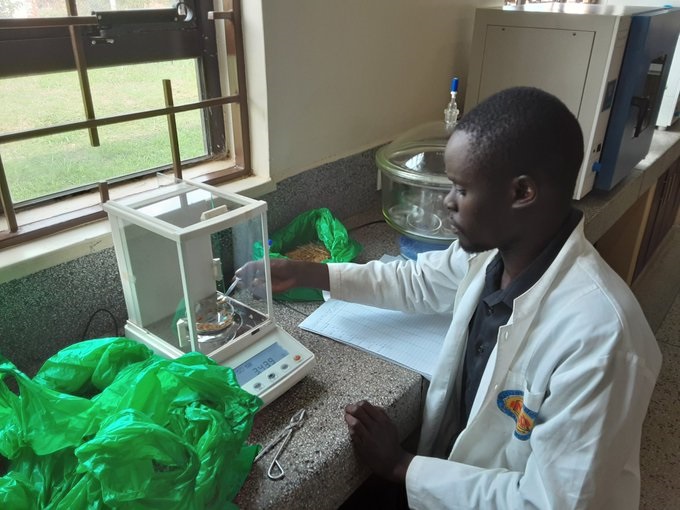 Akuku James is from Adjumani district of the west Nile region of Uganda, a fourth born in a family of six children and the only graduate in his family,  Akuku holds a bachelor of science in Agriculture from Makerere University where he graduated with a first class honors in 2018. Now a beneficiary of the mastercard foundation scholarship through RUFORUM and forming part of the third Cohort in 2019, he is forever grateful to MasterCard foundation and RUFORUM for giving him an opportunity to undertake his graduate studies.  He shares his story of his academic journey so far.

I currently study Masters of Science in food security and community nutrition at Gulu University. This degree program is giving me advanced skills and knowledge to support my community in improving food and nutrition security. I thank Gulu University department of Food science and postharvest technology for designing this unique degree programme whose emphasis is on integration of nutrition in farming systems and agribusiness which provides opportunity to ensure that future food systems and agri value chains are nutrition –sensitive

My research focuses on evaluation of local rice varieties and released varieties for acceptability.  I realised that it has become a big concern that many new rice varieties that are released are not adopted well by farmers, as researchers, we think that this has something to do with the sensory properties of these rice varieties. My research will study physiochemical and sensory characteristics of selected rice genotypes in the Uganda germplasm and relate them to the acceptability.  The intention is for this study to inform future rice improvement programmes in developing varieties which are not only with good agronomic characteristics but also good sensory features which can be accepted by the target population. The academic staff at Gulu University are extremely supportive and are qualified. I believe that Gulu University has the ability for high quality graduate training because they have the facilities and experienced staff for the training.

I never thought that I would ever have graduated with a first degree let alone with a first class  honors. This was because, as a child, I hated school and with a father who served as a police office Mr. Mindra Francis (RIP), we, as a family, spent most of our life moving from one police barracks to another. When I joined primary one, my father was transferred three time in that year, so my siblings and I had to change school based on our father’s transfers. I must have studied in a different school every single term, this got me so confused that I barely knew anything in school.

In 1999, my fathers was transferred to Kaberamaoido in eastern Uganda and it was now third term which was the promotional term, we had joined a school known as ‘Township Primary School’ and I was in primary one, I tried as hard as possible to avoid my teacher for fear of being asked questions in class. Whenever I was given money to buy a snack at school, I always bought roasted cassava which was really delicious. I often left some to be eaten on my way home at lunch time. I would always remove all the items in my mathematical set and place the cassava inside the set case and put my pencil in the pocket together with my counters.

One day, as always, I had placed my cassava in my mathematical set case which went missing as the teacher was teaching, I never saw it next to me, we used to study under a mango tree and used to write on the ground under that mango tree only bright pupils would be served with potable chalk boards for writing while us the dull ones wrote on the ground. I had to leave the class and went in search of my set which contained my cassava which I treasured more than anything, I started looking for every young pupil who had a set similar to mine, opened it and saw what was inside, fortunately I found one pupil with it, he said he had picked it from down, but the cassava was still inside, I got my set and went back to class,

My class had 50 pupils, and one day, one of my teachers said every pupil was going to answer a question before leaving the class for lunch, every pupil who was asked did pass their question but I was the only one who failed to answer even the simplest question, every time I tried to answer,  I failed, I would be asked to read the alphabet [A, B,C,D] and I would still fail, read 14, the teacher would say, and I would fail, spell cat , I failed, I knew nothing while my fellow pupils all passed and I  was left alone in class with the teacher. I think the teacher thought I was a pupil who needed extra attention so he called me to his table which contained a lot of charts, alphabetical later charts, names of animals, numerical figures and many other learning tools.

He started talking to me slowly in a friendly manner, he started teaching me the alphabets from A,B, C , he then  taught me vowels and how to join vowels and consonants, and how to form a word and read local language. As for me what I was taught was immediately forgotten to the annoyance of the teacher. Thanks to his patience, he never gave up on me.

I really knew nothing in school, my foundation was poor and my school was not helping either. On the day of the final exam, I sat next to a girl called Ate. Ate was the daughter of our neighbor at home, I really hated Ate because she reported me to mother whenever I mis-behaved at school, I often fought with and my mother would beat me whenever I beat Ate.

Ate was the reason I repeated Primary one,   On the day of the final exams, I was sitting next to her inside one of the class rooms preserved for such days. Since we used to sit on the floor  the class was congested, Ate had sat on my exam paper and as she was trying to move her body, my exam paper tore, I was upset and the teacher said there was no extra paper for anyone who had torn his/her paper, and  he cannot accept a torn paper for grading. Amidst the confusion, I knew that deep down, I would not still have made it to Primary two because I still had a lot to learn. Being unable to do the exam as a result of a torn paper was a perfect excuse for me. I repeated primary one.

Research was my calling

In Kaberamaido the Military Barracks was not far from our home, the Military used to do their routine, physical exercise or jogging called ‘mchaka mckaka’, we always loved it every evening when this group of solders ran along  the main road up to the town Centre singing patriotic military songs, we really loved these songs, and joined these solders in the jogging and I was greatly inspired and I thought that when I grow up I would join the army. That was far from the reality, as Our Lady of Africa Secondary School in Namilyango gave me  a school bursary for my Adavnced Level education and I managed to get a Government Scholarship to study my first degree at Makerere University in Agriculture where I saw vast opportunities and challenges. I realised a big gap in scientific research and promised to perue that path if I got the opportunity to progress beyond my first degree. And now through RUFORUM with support from the Mastercard Foundation, I did get the scholarship to study for study Masters of Science in food security and community nutrition. I believe that my findings will greatly contribute to a pool of knowledge on rice research in Uganda and Africa.

He is a beneficiary of the MCF@RUFORUM Scholarship and was among the third cohort scholarship recipients undertaking Masters of Science in food security and community nutrition at the Faculty of Agriculture and Environment, Gulu University.