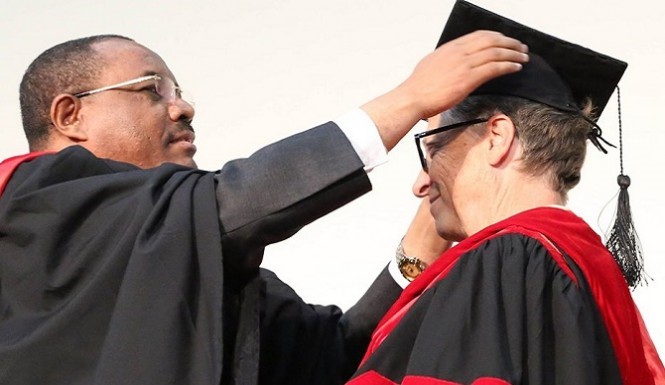 Expressing his gratitude at the conferment of an honorary doctoral degree from Addis Ababa University, Ethiopia, for his dedication to medical and scientific philanthropic activities in economically developing countries, the Microsoft founder Bill Gates spoke of his commitment to the African continent, its responsibility in developing itself and the pivotal role played by agriculture.

“The real fuel for development will be the resources of African nations themselves – whether that’s in the form of government funding, private-sector investment, or just plain human creativity at all levels of society. This is where the idea of ‘African countries learning from each other’ becomes so important. If you want to spend your national budgets as effectively as possible, there is now a clear path for doing exactly that – and Africans themselves are defining that path, for others to follow if they choose.”

Talking of his first visit to the continent with his wife. Melinda, two decades ago, he remarked that in addition to being in awe of the land’s natural beauty, “we were no less awed by the poverty we witnessed. Children were dying from illnesses we’d never even heard of. This struck us as deeply wrong – and totally unnecessary.”

It was an experience that impelled the couple to initiate the not-for-profit Bill & Melinda Gates Foundation, which has been active supporting critical and diverse projects in Africa ever since, with a growing personal optimism held by Mr Gates that “this continent is now in an incredible position to shape its own destiny for the better.”

Supporting this increasing optimism with strategic financial investment has also been evident in the field of sustainable agriculture and agricultural higher education. Last year, with their backing of “programmes developed by Africans, for Africans”, the Foundation provided a five-year grant to RUFORUM, with Mr Gates observing “If you want your country to rise from low-income to middle-income status, emphasize two things: health and agricultural development. If you get health and agricultural development right, the gains are exceptional, and they reverberate through the rest of your economy for decades to come.”

Speaking of agricultural achievements on the continent, Mr Gates highlighted a number of important, illustrative innovations. For example, after using only two fertilizer types for the last thirty years, for such a large and geographically varied nation, the Ethiopian government’s Agricultural Transformation Agency worked with its Ministry of Agriculture to find that “the best way to assess fertilizer needs nationwide was to analyze the soil using remote sensors and satellite imaging”, resulting in a “soil-mapping system that’s unprecedented not just for Africa, but for virtually anyone in the world.”

In Nigeria, agricultural zones have been established based on the distinct geographies of the country to help growers in those regions with farming and processing techniques tailored to local crops.

But while such agricultural innovations are welcomed on the continent, Mr Gates remarked, there is not only a need for African food production to keep pace with an accelerating population growth, but also with a second major challenge to Africa: global climate change. Importantly, both areas were in evidence as ongoing research presented at the recent RUFORUM biennial conference held in Maputo, Mozambique.
Concluding his speech with a warm welcome for the commitments made on agricultural development at last month’s African Union meeting – including working towards ending hunger in Africa by 2025 by at least doubling productivity in the sector – Mr Gates informed his audience: “The rise of this continent will depend on whether leaders – here in Ethiopia and all across Africa – are open to learning from each other, and from their own people. Whether or not that happens will depend on you – the future leaders of this country, and this continent. By focusing on basic health and agricultural productivity – and by learning from what is actually working right here – you can ensure that Africa will keep rising.”